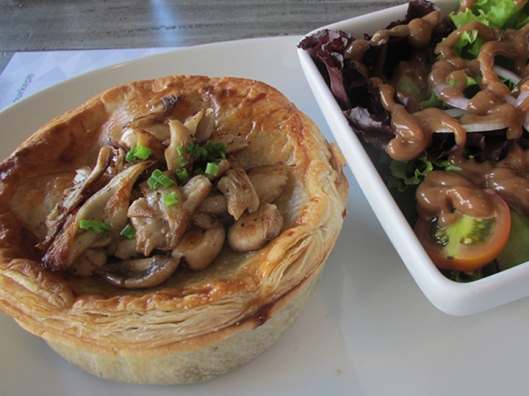 It’s always a really g’day when I pop in at Bondi & Bourke for its modern Australian fare. I especially enjoy Chef Wade Watson’s vogued-up version of the classic Australian culinary icon — the meat pie.

The meat pie, as you may expect of course, was brought in by British settlers. And, originally, the Aussie version of the meat pie contained just mutton and gravy. Later on, the filling evolved into mostly diced or minced meat with gravy, sometimes with other ingredients added on such as sweet onions or earthy mushrooms, all inside a flaky pastry. Sometimes it’s topped up with homemade tomato sauce (zestier and tangier than the commercial ketchup). What makes it different is that the traditional Australian meat pie is compact in size as to be easily eaten on the go. Ozzies love munching on it while watching footy. That’s Australian rugby to you.

At Bondi & Bourke, their pies contain minced and braised prime steak. juicy and tender, in richly seasoned gravy. There is a choice of four kinds of steak pies — Classic (with caramelized onions), Steak and Bacon (with double-smoked bacon), Steak and Mushrooms (with garlic mushrooms), and Steak and Cheese (with gooey mozzarella), accompanied by your choice of either fries or salad. I have no favorite — I love them all!

There are, of course, other delicious dishes which showcase Chef Wade’s take on modern Australian cuisine. And I wish he’d bring back that one special that was simply superb — the sausage platter served on top of colcannon mash (that’s potatoes and kale or cabbage), accompanied by 3 kinds of mustard!

The restaurant is on the street level of Cattleya Condominium Building on Salcedo Street in Legaspi Village. Always best to reserve a table — just call 8331812. They also have a branch at Burgos Circle in BGC.